A new attribution to Henry Gyles

Knedlington Old Hall is a modest seventeenth century manor house near Howden in East Yorkshire, probably built c.1630 on an older site by Nicholas Arlush (d.1673), a prosperous lawyer and landowner. The house is architecturally significant and unique in the region. Built in a high-status mixture of brick and limestone to an adventurous early-renaissance square ‘compact’ plan, the perfect duality of the south façade is one of the most striking expressions of this influential new plan form in Britain. (Fig. 1) The Old Hall was altered and several rooms were fitted-out, probably in the 1670s, by Stephen Arlush (1625-1682), a prominent Cambridge-educated Puritan clergyman and the son of Nicholas.1 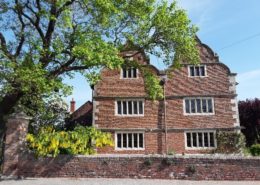 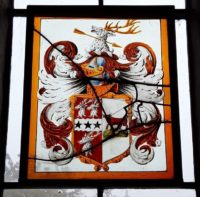 Fig. 2. The Knedlington panel in situ in 2019 after conservation, repair and re-mounting (Image © Phil Thomas)

In the past it has been cautiously speculated that the little panel of armorial painted glass in the center light of the parlor east window (Fig. 2) might be associated with Henry Gyles of York (1645-1709), and an attribution to Gyles seems very plausible on the basis of style, technique and the proximity of Knedlington to York.2 But, until now, nothing has been discovered which might link Gyles with any of the seventeenth century families connected with Knedlington Old Hall, or suggest why the panel should have come to be there or what its date might be. 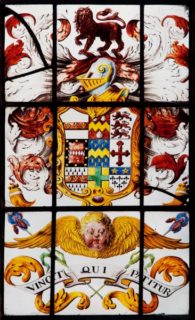 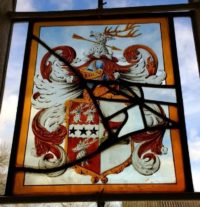 Fig. 4. The Knedlington panel in situ in 2018 before conservation and repair (Image © Phil Thomas) 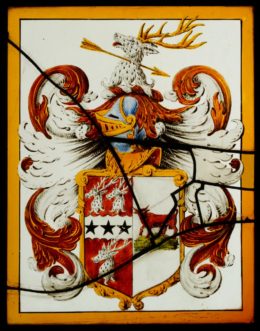 The arms are painted on a single piece of clear tint h 29.3cm (11½ ”) w 23cm (9”) with a distinctly greenish cast and executed entirely in yellow stain and enamels. Surrounding the shield is a cartouche like those found in seventeenth century Italian bookplates; not untypical of Gyles, but simpler and more incipiently Rococo than those on the recently attributed Gyles armorials at Flintham (1698) and Belsay (1699) (Fig. 3), recorded and interpreted in Vidimus 82 other Vidimus 80, respectively. The characteristic Gyles mantling is colored argent or white and lined with red, as is his usual practice, which here also follows the correct heraldic rule, and is beautifully arranged to frame both the shield and crest, which is not always the case. Because the panel is small the yellow borders need not be leaded separately, so the artist allows details at the top and sides of the image to spill into them in that charming way glass designers have enjoyed since the fourteenth century. Something very similar occurs on a signed Gyles cartouche of 1697 in Norwich.3

The Gyles scholar J.T. Brighton notes Gyles’s "Failure to acquire a good red" as a ‘Serious deficiency in his heraldic work’.4 In the Knedlington panel the reds are dull and more akin to brown, made up of multiple applications of stain. He apparently had considerable difficulty obtaining good enamel colors, yet the blue and gray of the steel helmet are excellent and well-preserved, unlike many of Gyles' blue enamels, and apart from a few tiny areas of paint loss the surface is stable and in good condition.

At some time the panel has been damaged by the impact of a missile just beyond the top right corner of the shield. Two small pieces were either destroyed or lost, and in subsequent repairs two of the breaks were cut or grozed back and the whole re-leaded with intrusive thick repair leads. (Fig. 4) These displaced and greatly distorted the shield, helmet and mantling in the center right area of ​​the panel. In Autumn 2019, the panel was conserved, repaired and re-mounted at Knedlington in an environmental protective glazing system by Barley Studio of York. After dismantling, seven repair leads were removed and the cleanly broken pieces were edge-bonded. Two new pieces were painted to replace the lost areas and the whole was re-leaded with the narrowest leads, returning all parts of the image to their correct relationships and transforming its legibility.

Previous commentators had presumed that the arms were those of the Revd. Samuel Terrick (d.1719), who in 1699 married the widow of the last Arlush of Knedlington.5 This cannot be the case. The Knedlington panel does show the impaled arms of a married couple, but the husband's side is not the arms of Terrick and his wife's is not that of her family, the Gibsons of Welburn - both prominent on Samuel's memorial in York Minster, although hers are given there incorrectly. Furthermore, the awkward relationship between the width of the panel and the width of the lights at Knedlington suggests that it was not made for the Old Hall.

Correctly identifying the sinister side of the shield is straightforward. The woman’s arms are argent a bull passant gules on a mount vert (Ridley of Yorkshire). However, the dexter side is something of a puzzle. It seems to be an informal and highly differenced version of the arms of Bacon, unknown to heraldry.6 There are at least a dozen armigerous Bacon families in England, all of whose arms have certain ideas and motifs in common, as might be expected. The Knedlington arms are variants of several of them and include borrowed elements - a field gules bearing three charges (in this case ermine stag’s heads erased, langued azure), a fess engrailed, three mullets sable - all crowned with an esquires steel helmet, the bars incorrectly shown as gold in Gyles’s usual manner, and the gruesomely imaginative crest of another ermine stag’s head erased, with golden antlers, a lolling red tongue and pierced through the neck by a golden arrow. The practice of borrowing and informally differencing coats of arms to increase one’s social prestige is certainly not unknown to heraldry and may be the case here.

However, it is possible to forge a link between the names Ridley, Bacon and Arlush, and thus to connect this panel with Knedlington Old Hall in the late-seventeenth century. The third wife of Revd Stephen Arlush of Knedlington was Anne Ridley, whose sister Margaret Ridley was married to ‘Charles Bacon of Beverley, gentleman ’,7 suggesting that this is a family piece, probably brought in from elsewhere between c.1670, when Stephen and Anne married, and 1691, when she died. It can hardly have happened after 1697 when the house passed from the Arlush family and beyond any connection with the Ridleys, so the panel is very likely to be earlier than either the Belsay or Flintham armorials (Fig. 5).

It is strangely satisfying that this little piece should be at Knedlington because the house and its families offer a tantalizing link with other painted glass attributed to Gyles in the East Riding of Yorkshire, where he apparently did very little work. In 1651, Stephen Arlush was appointed curate of Cawood, about fifteen miles from Knedlington. In the former vicarage (now Manor House) in the nearby village of Riccall are two small pieces of glass which Brighton accepts as Gyles’s work.8 One of them bears the rebus of Thomas Elcock, vicar of Riccall. Stephen Arlush’s sister Sarah married into the Elcock family, who were regarded as close kinsmen, and Stephen’s Will of 1681 refers to ‘Brother-in-law Elcock’ and a cousin of the same name. The Elcock family would eventually inherit Knedlington in the mid-C18, but only after they had changed their name to Weddell and inherited the magnificent Newby estate in North Yorkshire.

Thus the panel in Stephen’s parlor at Knedlington is connected with his wife’s sister and brother-in-law, and the pieces in Riccall with Stephen’s kinsmen and a fellow member of the clergy, in a village he will have known well. One of the Riccall panels is dated 1690, which is perhaps also a plausible date for the Knedlington panel.

With thanks to Keith Barley and the team at Barley Studio, and to David Haddon-Reece for his heraldic research and encouraging enthusiasm.