The island state of Fiji, located around 2000km north of New Zealand, consists of 332 islands, of which only around a third is inhabited. Almost 60% of the population are native Fijians (predominantly Melanesians with Polynesian influences) and a little less than 40% are of Indian descent (the Indians were brought to Fiji by the English in the late 19th century to cultivate sugar cane). At the end of the 20th and the beginning of the 21st century there were repeated conflicts between the two population groups, whereby the Indian minority was economically dominant, but was politically suppressed. In the meantime, most of the conflicts have subsided and are no longer noticeable to visitors to the country. On the contrary, the Fijians are some of the warmest and happiest people I have ever met. The omnipresent “Bula!”, Which translates as “life” and is mainly used as a greeting, is always exclaimed very loudly and euphorically, regardless of the situation in which one encounters Fijians. At first you get the impression that the whole thing is a bit artificial, but over time you notice that it is authentic and serves to express the unbelievable joie de vivre of the Fijians. The tradition of welcoming guests with singing and saying goodbye to them when they leave is also very nice. The welcome song "Bula Maleya" is a very happy song, while the farewell song "Isa Lei" is very sad and makes the farewells particularly emotional and difficult:

These songs are performed with several voices in the choir. Every Fijian seems to know his or her role in the choir well, no matter how the singing troupe is composed. Anyone who is around just leaves everything and joins them to join in. Every time a huge experience!

Soft Coral Capital of the World

Jean-Michel Cousteau, the eldest son of the legendary Jacques Cousteau and himself a marine researcher and filmmaker, called Fiji the “Soft Coral Capital of the World” on his first visit. And not without good reason, because the abundance of soft corals and their colors are simply breathtaking. Of the areas that I was allowed to dive in Fiji, the Rainbow Reef stood out in terms of soft corals. A reef system that lies in the Somosomo Strait between the two islands of Vanua Levu and Taveuni. In order for soft corals to appear in their full glory, a current is needed and unfortunately I never had enough of that during my dives. In other words, the corals were only partly "open", while other parts were drawn together. If you look at the following pictures, you might not think so, but you can still imagine what the reef could look like with another 30-50% more mass of soft corals: 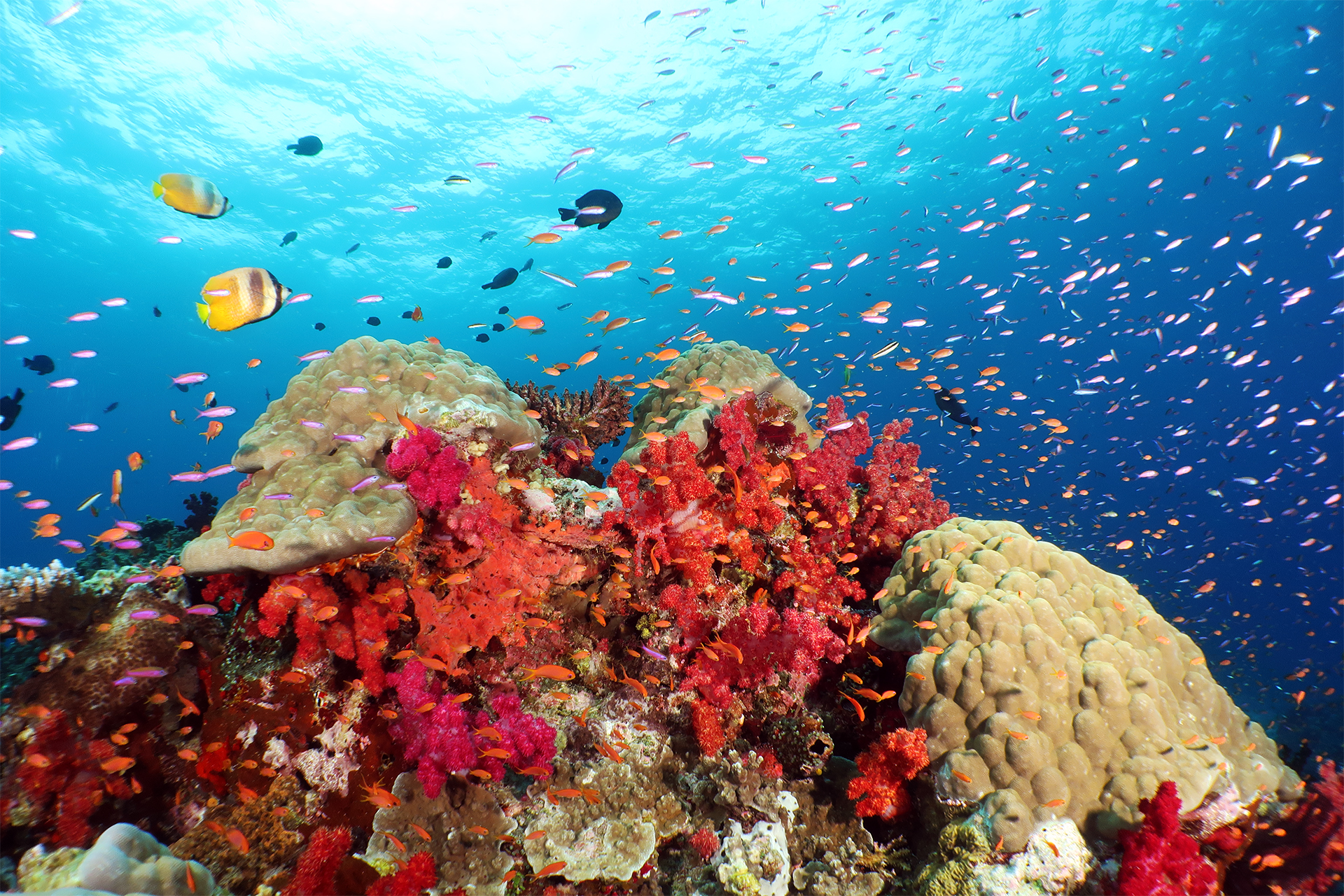 In addition to the abundance of soft and hard corals, the reefs in Fiji are also incredibly populated with all kinds of small reef fish. The anthias are responsible for the "background noise". These are all the small, orange and pink colored fish. The visual spectacle is rounded off by the often good visibility and the clear, blue water. 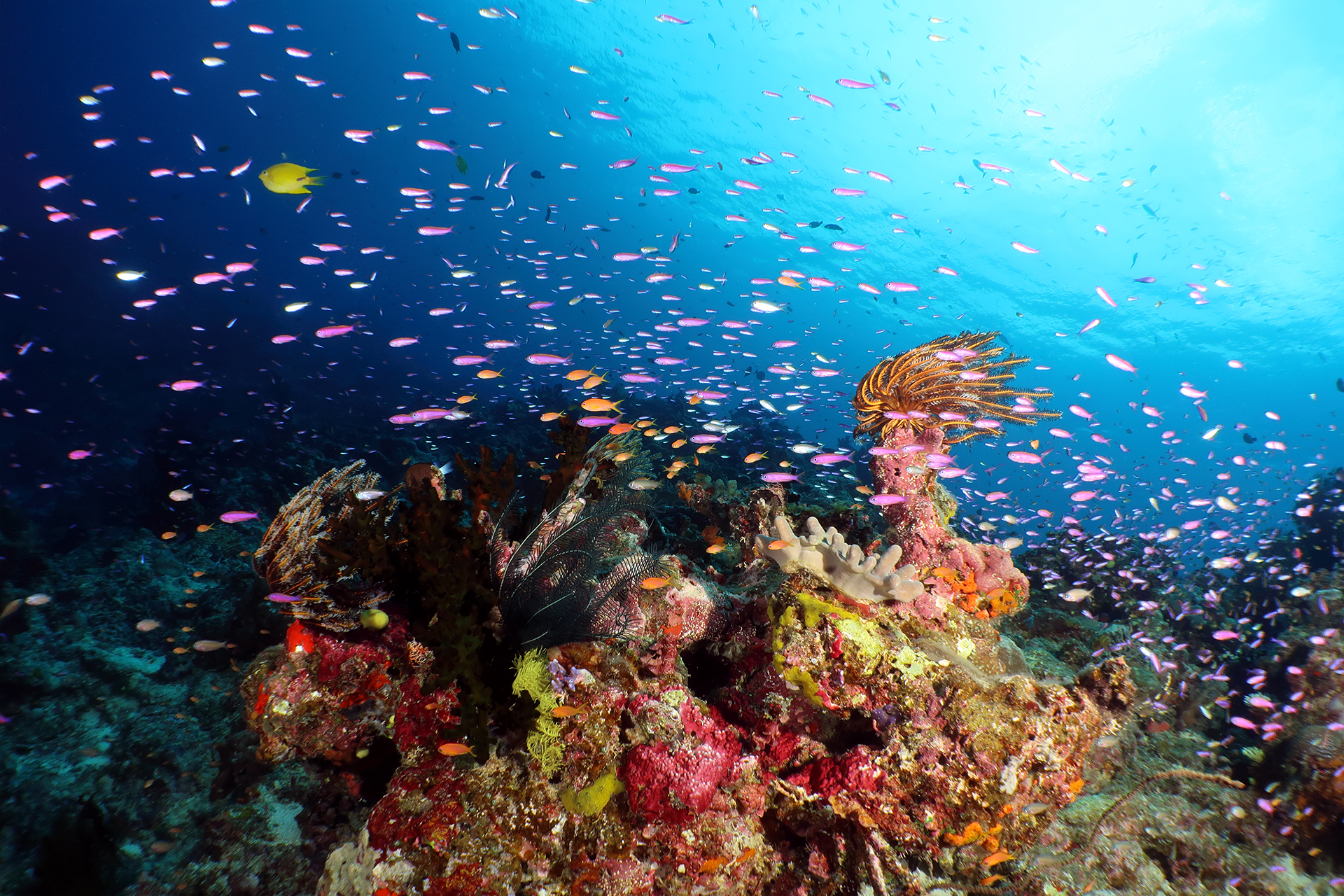 Not only were there a lot of soft corals at Rainbow Reef, but also at all other dive sites that I was allowed to dive, such as here in the Beqa Lagoon. After this experience it is clear to me that this will not be the last time I have been to Fiji. 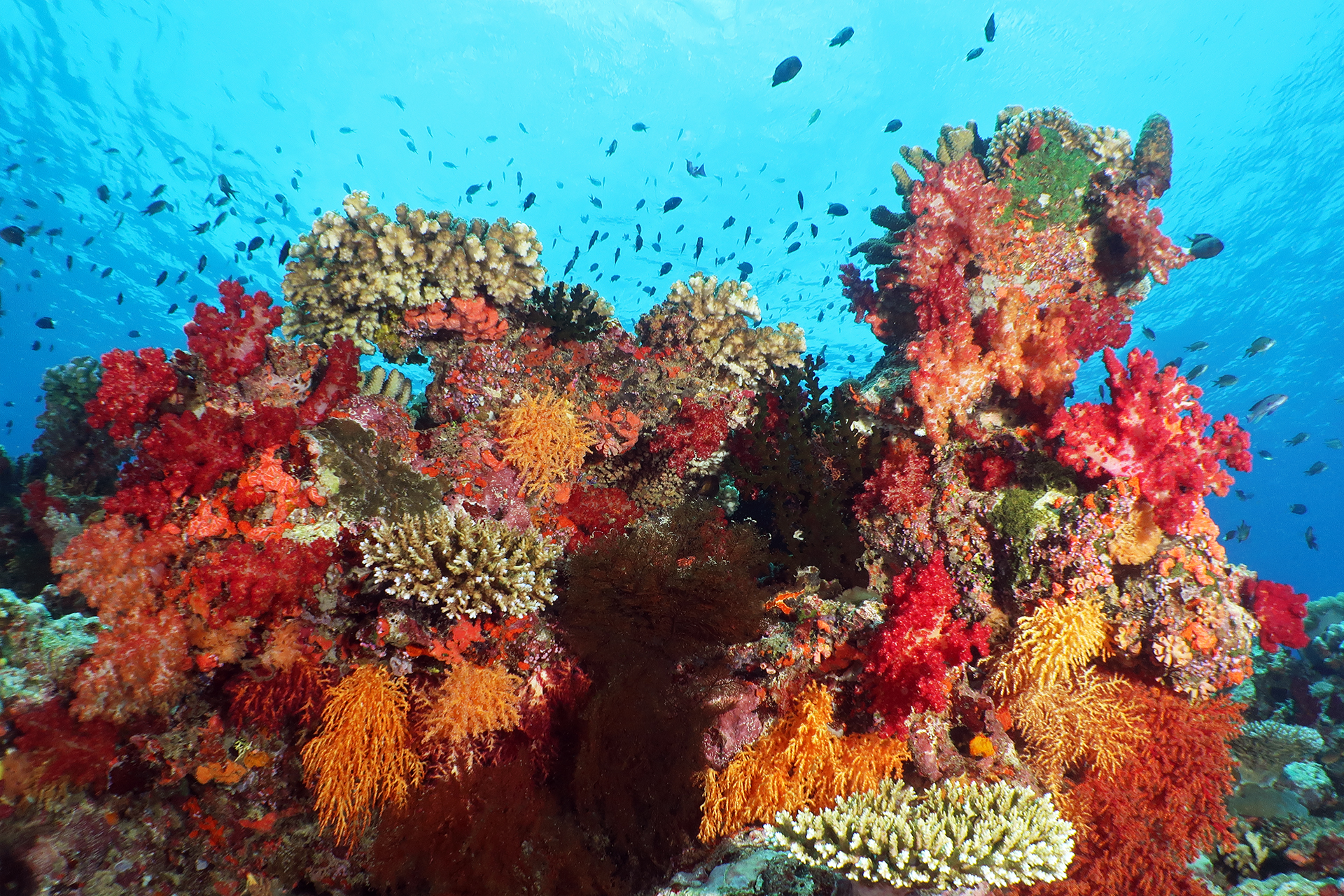 Once the soft corals had completely contracted, the many anthias and other colorful reef inhabitants such as this Pacific trumpet fish provided the necessary splash of color: 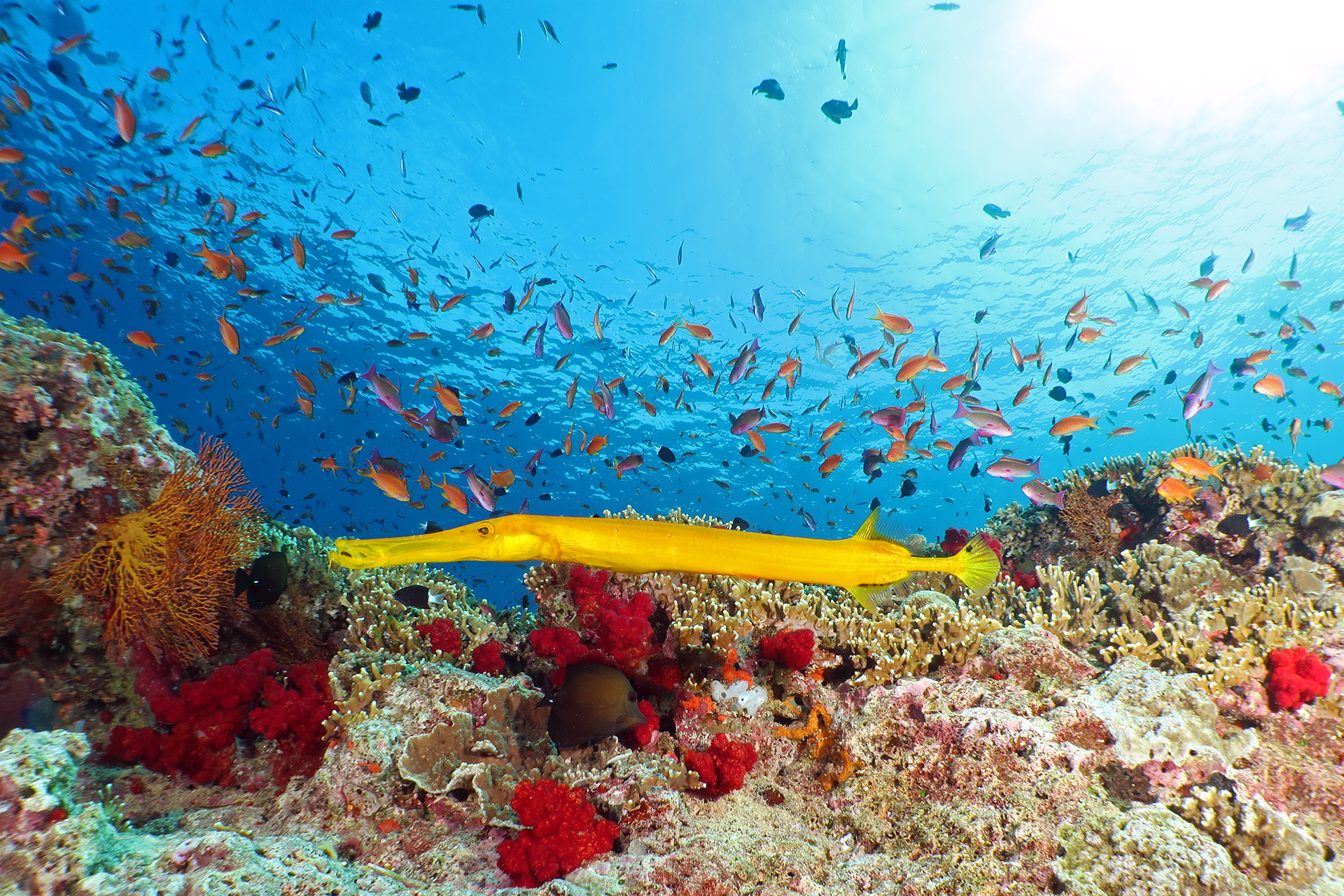 The passage between the coastal town of Pacific Harbor on the main island of Viti Levu and the island of Beqa has been known for spectacular dives with sharks in recent years. The concept of lined shark dives has been established over the years and basically works in such a way that the divers position themselves at the foot of a sloping reef at a depth of approx. 20m in a line with their backs to the reef. In front of them is a sandy, slightly sloping bottom towards the open sea and on it are various barrels with fish parts such as tuna heads, which are fed to the sharks by "shark feeders" during the dives. In addition to the shark feeders, there are a few safety divers whose only job is to analyze the behavior of the sharks and, in case of doubt, to keep them away from the shark feeders, the divers or themselves with long, blunt rods. This is a necessary safety precaution, as you do not dive here with cages, chainmail or the like and the sharks are ultimately still wild predators that are naturally not interested in people, but are not always 100% predictable are, especially not in the context of a feeding. According to the organizers, there are never any incidents worth mentioning, but as always with diving, safety comes first.

Lined shark dives are always controversial and sparkle for discussion. On the one hand, humans intervene in nature, on the other hand, it shows a lot of people how animals behave towards people and that they are in no way interested in them as food. Most divers who have experienced such a dive become ambassadors for sharks and will try to correct the shark's image whenever possible. Because the bad image that sharks have suffered from since Steven Spielberg’s "JAWS" (The White Shark) is partly responsible for the fact that the majority of humanity is not bothered by the fact that an estimated 100 million sharks are killed every year. Sharks are not the bloodthirsty ogre, as they have been portrayed in the relevant films or media reports, and some of them still are. Measured by the number of people who go into the seas, there are a total of 80 annual incidents, of which 8-10 are fatal. The infographic below from statista.com shows which animals are responsible for the most human deaths each year, led by mosquitoes, followed by humans: 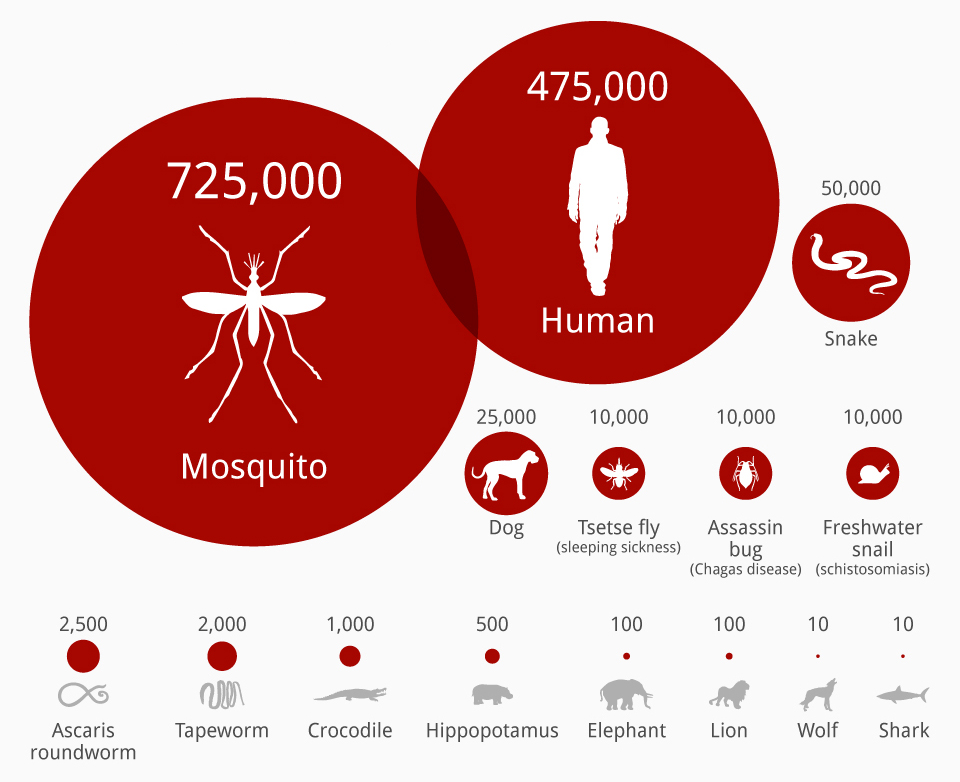 In percentage terms, sharks pose no threat to humans at all. Nevertheless, they are not adequately protected and are slaughtered in gigantic quantities for senseless products such as shark fin soups or pills to increase potency (without a medical background). This makes up about 60-70% of the sharks killed, the rest of the sharks mostly end up as bycatch of the large fisheries, which target other species such as tuna and the like are out. The sharks at the top of the food chain in the oceans have an important role to play in maintaining the natural balance of the various marine life. Due to their exploitation, the sharks can play this role less and less, which threatens to lose the natural balance in the oceans. Many shark species are already endangered and there are scenarios according to which there will be no more sharks in the oceans in 50 years. It is not yet too late to stop, or at least slow down, the downward spiral. The small and modest contributions that each of us can make without great effort are the renouncement of marine products in our latitudes (lower demand leads to lower production, which in turn means less bycatch), as well as a more conscious use of plastic products. Drinking straws, shopping bags, plastic bags for fruit and vegetables and drinking bottles are some examples of plastic products that very often end up in the sea. In Switzerland we have a great disposal system with high-tech incineration plants. In other words, you don't have to worry that much here, but there are very many countries in which disposal still goes through landfills and from there the way into the sea for all the plastic waste is already paved, so to speak. And why should one differentiate in the subject, because it works quite well without plastic, whether in Zurich, Honolulu or Sydney.

But now to the real issue, the sharks between Pacific Harbor and Beqa Island. I actually expected to see a bunch of bull sharks here but not many other species. During the preparations for the dives it quickly became clear that the bull sharks, nurse sharks, lemon sharks, silver tip sharks as well as white and black tip reef sharks, some of which are supposed to be seen here, are all only supporting actors. Because the arena belongs to the tiger sharks, of which you can usually see from one to five per dive. And that is actually how it was on the two dives. There were five tiger sharks in the first and three in the second. Whenever the tiger sharks were around, the other sharks held back. Because the hierarchy is of central importance with sharks and tiger sharks are pretty much on top as long as no "Great Whites" appear, which is highly unlikely in tropical waters like Fiji. The tiger sharks were all between 3 and 5 m long and sometimes more than just impressive. They did their laps and came very close to the Shark Feeder and the divers. Sometimes down to a few centimeters, so that you could even touch them, although the briefing said you shouldn't do this. There are probably situations where certain people cannot hold back and if the feeders do it too, it becomes all the more difficult to get what has been preached through. In any case, I managed to take good shots during the two dives, while my friend was able to take some incredible shots on her GoPro: 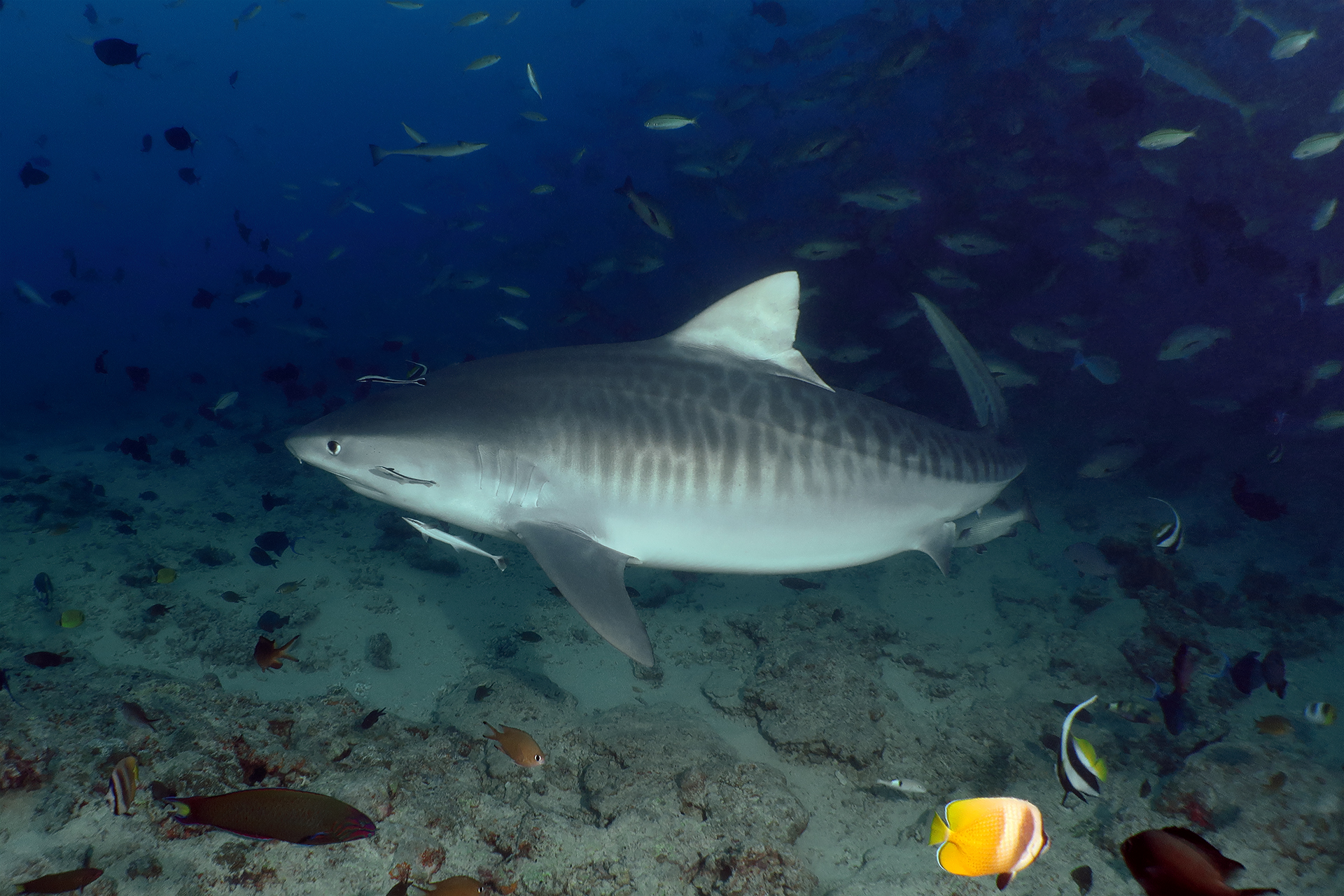 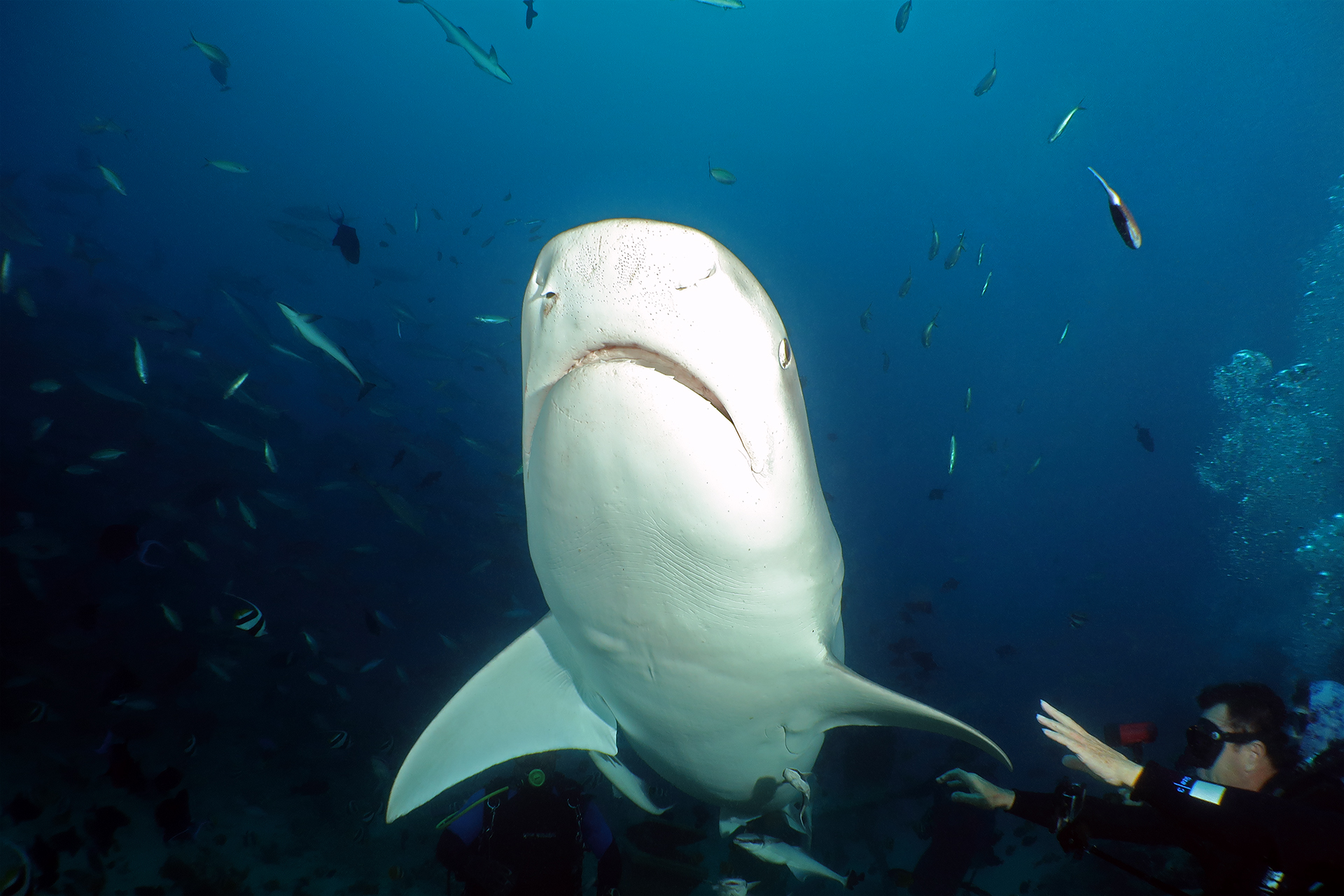 An amazing experience and hopefully not the last time that I was allowed to experience this! 🐯🦈😍

And now about the must-see crustacean of this destination:
The whip coral shrimp (English Dragon Shrimp)
The whip coral shrimp has a lot in common with the wire coral shrimp presented in my Tonga article, but it lacks the long forearms with pincers, but it has a few pronounced humps along its back. A tiny thing with a maximum length of 2cm, very difficult to find but all the more exciting to observe: 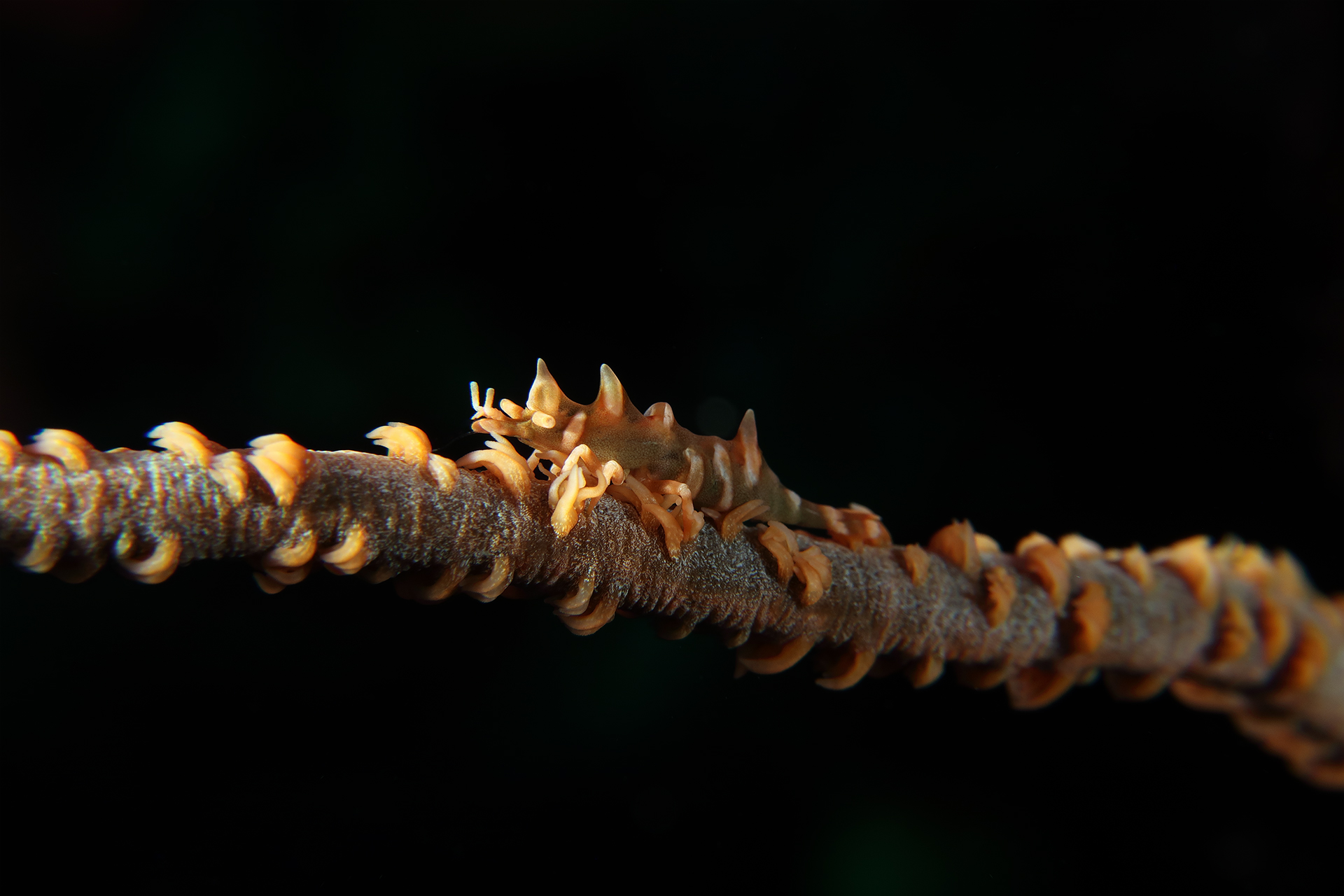 Fiji over water, a versatile paradise

The treasures that Fiji has to offer above the water are at least as magnificent as those below the water. Because the country offers pretty much everything from the small, sandy island lined with coconut palms to the large and hilly island of volcanic origin with a jungle. The vegetation is particularly remarkable. Although I only saw a small part of Fiji overall, the "garden island" Taveuni was unbelievable in terms of vegetation and probably the greenest and wettest spot on earth I have ever set foot on. Here is the view down to the sea from a vantage point on the way to a couple of waterfalls:

The proportions are not entirely clear from this picture. On the slopes to the right and left you can see taller plants or palm-like trees. You wouldn't suspect it, but these are 10-20m high. From this, in turn, the heights of all other plants can be guessed. Most of the country has a layer of green, damp and dense vegetation several meters high. Not exactly here, but very close and on the same side of the island, some parts of the film "Return to the Blue Lagoon" were filmed. In general, Fiji is a popular Hollywood destination. Many more films have already been shot here, but the showcase case remains Cast Away, because the island on which Tom Hanks lived for a long time in the film actually exists, is part of the Mamanuca Islands and is called Monuriki. It is an island that has not been developed for tourism, which is why other islands are playing with the “Cast Away” label and are marketing corresponding offers.

The paradisiacal sandy beaches of Fiji mostly present themselves with white sand, palm trees without end and a sea that offers all colors thanks to the different water depths 🏝😎