An asynchronous port on the computer used to connect a serial device to the computer and capable of transmitting one bit at a time. Serial ports are usually identified on IBM compatible computers as COM (communications) ports. For example, a mouse might connect to COM1 and a modem to COM2. The picture shows the DB9 serial connector on a cable.

Where is the serial port on a computer?

The serial port is found on the back of the computer and is part of the motherboard.

With the introduction of USB, FireWire, and other faster solutions serial ports are rarely used compared to how often they've been used in the past. Also, many new computers and laptops no longer have a serial port.

In the above graphic of a serial port, you can notice the DB9 serial port connection is easy to identify. The connection is in the shape of the letter D, is a male connector, and has 9 pins.

What is the serial port used for?

Below is a listing of various hardware components that can be purchased and used with your serial port.

Below is a listing of each of the pins on the DB9 connector, their purpose, and signal name.

With many computers, the serial port is labeled as "10101"which are ones and zeros to represent binary. A user may also interpret the number" 1 "as the letter" I "and the zeros as the letter" O "and call it the"IOIOI"port. 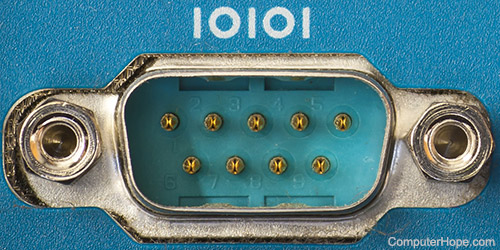 As shown above, pin one is in the top-left portion of the port and pin 9 is in the bottom right.

Most of today's computers are eliminating the serial port in favor of USB ports.