How to get dream ring archeage

The Megalodon is a dangerous species of giant shark that roams the open waters of the Sea of ​​Thieves, preying on player ships. There are five types of Megalodon species with varying colors and rarity.

They were first introduced as a time-limited encounter for The Hungering Deep, returning as a permanent encounter, with additional species, in the Shrouded Spoils update.

Megalodons are vicious predators that appear around Player Ships on open seas. A Megalodon encounter begins when the tense Megalodon music starts playing, after which, the Megalodon appears out of the deep sea behind the Ship and starts swimming closely until the Ship sails out of its hunting grounds or the Megalodon is defeated. Each Megalodon spawns with a unique personality, with ranging aggression, sometimes passive until provoked.

Players wishing to get rid of a Megalodon may sail close to Outposts, Islands, Seaposts or Shipwrecks, the Megalodon will turn away and patrol the area where it first appeared. 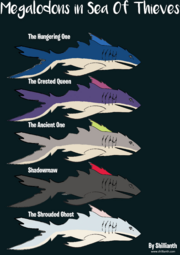 The various species of Megalodon. Illustrated by Shillianth.

There are five different species of Megalodons, listed in order of increasing rarity.

While each variant have distinguishing colors, their markings (scars, stripes, etc) may vary per encounter.

The Shrouded Ghost's body becomes a dark purple at night.

Upon defeat, a Megalodon will leave behind a generous pile of Treasure where they died. Defeating a Megalodon will also give a notable Emissary Grade Reputation boost to crews sailing as Trading Company Emissaries (with the exception of Reaper's Bones)

All Megalodon variants have the same reward pool: