How old are the police of Dcop Kofi Boakye 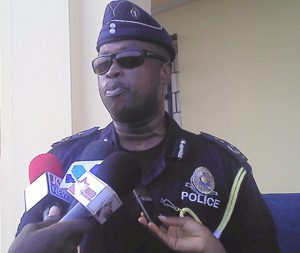 DCOP Kofi Boakye (4th from right) in a photograph with some senior police officers in WR. With him is the new Regional Commander, DCOP Alex Quaino (4th from left)

A farewell ceremony has been held for DCOP Nathan Kofi Boakye, the outgoing Western Regional Police Commander, at the Regional Police Headquarters in Sekondi last Friday, paving the way for his transfer to the Ashanti Region as the new commander for that region.

DCOP Kofi Boakye, who was posted to the Western Region about 10 months ago, moves to the Ashanti Region to take over from DCOP Augustine Kwabena Gyenning, who has been sent to the Police Headquarters in Accra.

It was well attended by high profile personalities in the region, including traditional rulers.

In separate interviews conducted by DAILY GUIDE, most of the dignitaries described DCOP Kofi Boakye as a? dedicated and honest? officer who played an important role in maintaining peace and discipline in the region.

In a brief speech, DCOP Kofi Baokye thanked all the officers, men and women of the Regional Police Command and the members of the Regional Security Council (REGSEC) for their immense support which he said, led to the successes he achieved within the short period he stayed in the region.

He appealed to the police personnel in the region to continue to be honest and dedicated and to accord the new regional commander the same support they gave him.

? Those of you who were happy when you heard that I am being transferred, should note that the new commander will maintain the status quo ?, he stressed

After the brief speech, DCOP Kofi Boakye introduced to the people his successor, DCOP Alex Quainoo, who is the immediate past Upper East Regional Police Commander.

The new commander pledged to continue from where Mr. Boakye had left off, and hoped that the police personnel in the region would give him the maximum support.

Prior to the coming of DCOP Kofi Boakye to the Western Region, the regional police headquarters was in dire need of facelift.

The nature of the police regional headquarters in Sekondi offered easy infiltration of hawkers and stray animals into the area.

Within the 10 months as Regional Police Commander, DCOP Boakye built a guard house and fixed a metal gate at the entrance of the Regional Headquarters.

He also ensured that all the floors of the various offices within the command were tiled.

He started the construction of fence wall around the headquarters and caused the painting of the buildings to give a new outlook.

When he took office as the Western Regional Police Commander, Kofi Boakye vowed to collaborate with other stakeholders to bring the crime rates in the region to the barest minimum, and make the area most peaceful and attractive.

Under his command, the region recorded significant reduction in criminal activities. For instance, in 2012, a total of 24,525 crimes were reported as against 17,957 cases in 2013.

Disclaimer: News Ghana is not responsible for the report or opinions of contributors published on the website.