Looker debuted in Double Trouble with Dialga and Palkia V.. He was first seen waiting outside as a policeman tried interrogating two Scientists that were hired by Team Galactic to guard Lake Valor. When the questioning went nowhere, Looker decided to leave his Croagunk in charge of the investigation.

In Leaping Past Lopunny, Looker arrived at the Battle Zone. He infiltrated the battleground, hoping to spy on the trainers there, but fled after being spotted by Buck. He then met with his client, Platinum Berlitz and joined her on a quest to obtain knowledge on the Distortion World. Their first stop was the Battle Castle, where they hoped to encounter strong Trainers that might have the information they needed. When Looker referred to Platinum by her title of "Lady", a young girl named Caitlin mistakenly assumed he was talking to her. Looker tried explaining himself, but was attacked by Caitlin's bodyguard, a Gallade. After the misunderstanding was cleared, Looker noted Gallade's strength and came to the conclusion that Caitlin was a Frontier Brain. Platinum decided to challenge the Battle Castle in order to get a chance to speak with Caitlin.

In Getting the Drop on Gallade I., Platinum continued her Battle Castle challenge. As she lacked knowledge on how to manage limited finances, she struggled with using her Castle Points, but won enough battles and earned the right to face the Frontier Brain. To Looker's confusion, the Frontier Brain wasn't Caitlin, but her butler Darach. With advice she received from Looker previously, Platinum figured out how to use her Castle Points effectively, allowing her to win the battle. Afterward, Looker learned from Darach that multiple Galactic Grunts had been spotted around Stark Mountain, but the conversation was interrupted when Buck revealed himself.

In Clobbering Claydol, Buck was after the Legendary Pokémon that lives in Stark Mountain: Heatran. Looker asked Buck to take him to Stark Mountain, but the boy refusing, stating that he'd take care of the villains himself. Later that night, Looker lamented on not being able to learn about the Distortion World and decided to try again later. The next day, Platinum challenged the Battle Arcade, eventually earning the right to face Dahlia. When an earthquake shook the building, Platinum told Looker to go investigate while stayed behind. Looker traveled to Stark Mountain, where he found Buck injured and surrounded by a group of Galactic Grunts. Buck tried to protect the Magma Stone from Team Galactic, only to inadvertently release the seal placed on Heatran, awakening it and allowing it to be captured by Charon, the new leader of Team Galactic.

In Cooling Off Heatran, Looker tried getting Buck to safety, but was trapped by Heatran's powerful flames. After managing to tie him up, Looker attempted to interrogate Charon, demanding to know why he went after Heatran. Charon explained his goal was to build an arsenal so that he'd be prepared to enter the Distortion World. In Softening Up Kakuna, Platinum expressed concern for Looker, who hadn't returned despite hours passing since he left. She chose to challenge the Battle Factory as it required the use of rental Pokémon, allowing her to send her party down to Stark Mountain to assist Looker. Shortly after defeating Thorton, Platinum's Pokémon returned with a heavily wounded Looker and Buck. The two were later taken to a first aid station to recover from their injuries.

In The Final Dimensional Duel XI, Looker appeared to arrest Charon after he was defeated by Platinum, Diamond, and Pearl. Before he could arrest the other Team Galactic members, Looker received a call from his superior, who called his current mission in Sinnoh off. Looker received new orders to investigate Team Plasma's Seven Sages in the Unova region. As he said his farewells, Looker handed Diamond a ManaphyEgg he received from some Pokémon Rangers in the Fiore region before flying off. 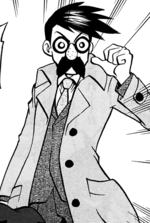 In Hallway hijinks, Looker appeared as a participant in the Unova Pokémon League. Disguised as Lou Karr (Japanese: ハ ン ダ サ ム ロ ウHanda Samurō), Looker battled his way through the tournament, eventually making his way to the Top 8. In Into the quarterfinals!, he went up against Black, using his Croagunk against Black's Galvantula, Tula. As Croagunk wasn't an Unova native Pokémon, Black struggled as he tried to figure out its typing. Eventually, Croagunk was defeated when Tula pulled an electrified web over it, knocking it out. Having been eliminated, Looker decided to use the rest of his time investigating other League participants he felt were suspicious.

In Something Suspicious, Looker attempted to spy on Marlon. Listening in on a conversation between Marlon and White, Looker learned that contestant Hood Man somehow entered the League without having earned a single Gym Badge. Later, White eavesdropped on a conversation between Hood Man and Gray, only to be discovered and captured by the latter. Gray revealed himself to be Zinzolin of Team Plasma, but was immediately tied up by Looker's Croagunk, freeing White from his grasp. White attempted to warn everyone that Team Plasma had infiltrated the League, but was Teleported elsewhere by Hood Man's Beheeyem.

In Cold hard truth, Team Plasma launched their attack, summoning N's Castle from the depths of the earth and having it surround the Pokémon League building. During Black's final battle against N, he was assisted by Looker, Cedric Juniper, and Leo. The three attempted to attack N's Zekrom, but it easily blocked their Pokémon's attacks and swatted them away.

Despite Team Plasma's defeat at the Pokémon League, several key members such as the Seven Sages managed to escape and avoid arrest. Looker spent two years investigating their whereabouts in other regions, but was never able to find any. When signs that Team Plasma had revived started to appear, Looker was sent back to Unova to investigate.

In The Transfer Student, Looker was assigned to meet Blake, a student at the Aspertia CityTrainers' School and a fellow International Police member. Shortly after making contact, Looker was attacked by a Scolipede, but it was quickly defeated by Blake's Dewott. To Looker's shock, Blake was a high-ranking member and his superior despite the gap in their ages. Blake took looker to the Aspertia City alleyways, where they met Blake's maintenance man, the Magician. After a series of physical check-ups, the three were alerted by a large explosion coming from outside. Looker and Blake went to investigate, where they found the culprit was Genesect, a Mythical Pokémon modified by Team Plasma.

In Flying type, Blake fought Genesect, eventually discovering it was under the control of Colress, a scientist on the run for conducting unauthorized experiments on Pokémon and the true identity of Hood Man. Noticing that Genesect was being manipulated by the Colress Machine, Blake deduced that it was still a wild Pokémon and worked together with Dewott to whittle its health down enough that it could be captured. Defeated, Colress revealed that Ghetsis made him the new leader of Team Plasma before fleeing. Afterward, Blake revealed he was searching for a female former Team Plasma Grunt that was tasked with protecting a memory card containing data on a machine that can counteract the Colress Machine. With their mission over, Blake and Looker headed back to the Trainers' School to write a report to headquarters about the incident.

In Legendary tornadus, Looker was ordered to wait on Route 20, where Giallo of the Seven Sages had been spotted. Blake later arrived with Whitley, hoping that she would react to Giallo and expose herself as the Team Plasma member he was looking for. They were interrupted by Tornadus, who Blake fought, only to discover its true target was Giallo. Blake eventually defeated Tornadus, forcing the Plasma Grunts controlling it to flee. Looker arrested Giallo, but the plan ended in failure due to Whitley falling asleep from her Foongy's spores and Giallo not recognizing the girl.

In Angry boy, Blake, Whitley, Hugh, and Roxie went into the Castelia Sewers to investigate a Pokémon kidnapping, only to encounter a group of Plasma Grunts led by Bronius and Ryoku. While the others fought the Grunts, Blake easily captured the two sages, eventually realizing that they were merely a diversion for something else. When a mysterious chill began filling the area, Blake headed towards the Relic Passage to investigate, leaving the sages behind for Looker to arrest.

In Pink slip, Looker searched for Blake, who had gone missing following a battle on the Plasma Frigate. He bumped into the Magician, who revealed that Blake had been discharged from the International Police for illegally giving the Magician access to the International Police database. As he fled to avoid arrest, the Magician revealed he lost contact with Blake at Castelia City and that his Pokémon all fainted at the Pokémon World Tournament construction site.

In Deduction Time, Looker found Blake's unconscious Pokémon at the construction site, but when he went to retrieve them, he was nearly run over by Skyla's plane as it was in the middle of landing. Looker then joined Skyla and Elesa as they took Leo and Hugh's sister to safety. In PS547, Looker found Blake in battle with Colress again. He left the plane to return Blake's Pokémon, but was shot out of the sky by Colress's Red Genesect immediately afterward. He survived due to his parachute, only to notice that he was falling towards the Plasma Frigate, which was under attack by White Kyurem. Later, Whitley and N encountered Looker and Alder on the Plasma Frigate. Alder revealed that he and Looker had been battling Ghetsis, but the latter managed to escape and hide himself. N managed to find Ghetsis, but an explosion tore the Plasma Frigate apart, sending everyone flying. After being informed by Blake that Colress had been defeated, Looker was taken to safety by Black's Brav. The Plasma Frigate ended up crashing into the abandoned N's Castle, setting the building on fire and putting the liberated Pokémon Team Plasma left behind in danger. With a combination of Fire, Grass, and Water Pledge, Blake and the others successfully doused the flames.

In PS548, Looker was seen greeting Blake, who had his International Police rank reinstated.

In Truth and the Mastermind Behind Team Skull, Looker and fellow International Police member Anabel arrived in Po Town, where a number of Ultra Beasts had appeared. They encountered Sun and Moon, a pair of children who had previously faced the Ultra Beasts. While Anabel questioned the children, she had Looker go and investigate the beasts that had broken out of Po Town to wrak havoc on the rest of Ula'ula Island. In Summon the Emissaries of the Moon and the Sun, Looker called Anabel to inform her that a large number of Ultra Beasts were about to arrive on Poni Island.

Six months later, in PASM35, Looker and Anabel approached Mount Lanakila via hot-air balloon. They were asked to deliver a Beast Ball so that it could be used to capture Necrozma. They arrived just as Sun and Moon defeated Necrozma, but the Prism Pokémon fired off final attack before it fainted, destroying the Beast Ball. Sun revealed he had a spare Beast Ball, which was given to Zossie to use on Necrozma. When Looker mentioned they were sent to Alola specifically to capture the Ultra Beasts, Anabel decided to lie and state they escaped back to their home worlds.

Looker has at least two other Pokémon, as he participated in the quarterfinals of the Unova Pokémon League, which requires a Single Battle involving three Pokémon.

Looker has competed in the following Pokémon Leagues: