let me higher, get me higher
Moeru mi no atsusa wa
Nanto naku no kyou demo
burnin 'up, we love shinjite
rock me baby, show me baby
Misete kure motto
Ore to kimi to de tsukuri agerunda
Densetsu wo other self 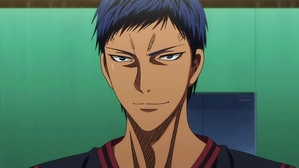 * In the fanbook, CHARACTERS BIBLE, an early character concept sketch of Aomine is seen. His face and eyes haven't changed, but accompanying a sketch of his original hairstyle, is a sketch of Aomine with longer hair, reaching his eyes and the back of his neck.

* On the first character poll, Aomine ranked 6th, with 710 votes. He went up one place on the second poll, this time with 1021 votes.

* The kanji 青 (Ao) in his name means blue, hinting to his hair color.

* Aomine and Momoi are childhood friends and her nickname for him is Dai-chan.

* Aomine has called Kuroko "Tetsu" ever since they started training ...
continue reading ...
AKASHI - ONLY HAS FATHER NO MOTHER

Akashi and Haizaki come from single-parent family ...
Kise have 2 sisters !!!
Aomine, Momoi & Kuroko are the only child in the family
Mukkun have a sister and 3 brothers ~
Midorima have a little sister ~ 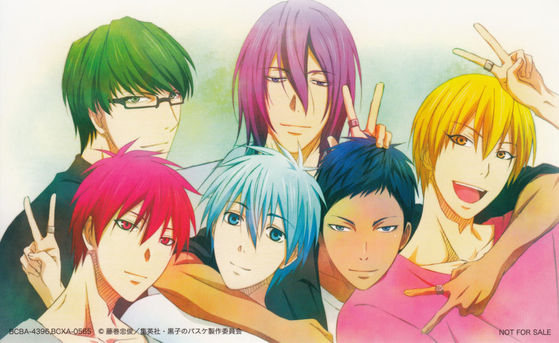