How to improve in umts frequency

Perhaps some of you know Neunkirchner Allee from vacation driving in the pre-autobahn age.
This is that part of the B17 (formerly Triester Straße) between Wr. Neustadt and Neunkirchen runs in a straight line for about 10 km through a pine forest. Since it is fairly inhabited, there is of course a great potential for a dead spot.

The southern runway also runs a little way next to the "17er" and the expansion is probably in progress here.

Directly at the Sankt Egyden stop (in the middle of the forest), far from the village, a new mast with cell phone antennas was erected.
The crate next to it has already been designed with perforated sheet metal in a fairly open manner, as was previously the case with other systems. However, it is quite large (compared to the one at my home in Guntramsdorf.

The part provided by ÖBB (HF distribution and cabling to the antennas) is already finished. The operator's technology is still missing. 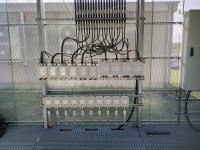 
A little TMA? Technology is already there: 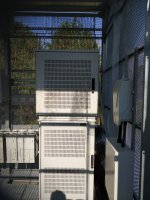 The canal branching off to the left leads to the older safety technology container of the ÖBB, but there are no lines there yet. 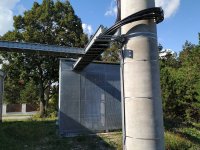