How to pronounce iesus hominum salvator

The noun sacrum IHS is derived from the transcription of the first two and the last letter of the Greek name Jesus, Iota-Eta-Sigma-Omikron-Ypsilon-Sigma or ΙΗΣΟΥΣ, i.e. JESUS. The I is the Greek Iota, the H is the Eta and the S is the Sigma.

IHS as the short form of the name Jesus can be found very often in Bibles from the Middle Ages and elsewhere. Until about 1450, the words Jesus and Christ and other nouns sacra were practically never written out in Bibles and documents. Initially, this abbreviation was provided with an overhead abbreviation, which was later transformed into a cross. This short form is used in the late Middle Ages, the most common use has been since the foundation by the Society of Jesus. The monogram is also often found as an ornament on churches or on paraments.
A popular interpretation for IHS is - among several others - in German also "Jesus, Heiland, Seligmacher". The Latin reading Iesus Hominum Salvator ("Jesus, the savior of men") is also widespread. B. used Bishop Walter Mixa as his motto.
In older (medieval) spellings, further attributes are missing, including the cross, which in Fraktur is sometimes indicated by a horizontal line in the left (higher) vertical line of the "H". Later the monogram seems to have been extended to include these. It is sometimes hypothesized that the "V" was placed under the IHS. As a rule, however, nails can be found there, which would then correspond to a reinterpretation of the "V", and the number increased to three - at least three nails were required for the crucifixion - and provided with a heart or other attributes, as in numerous depictions can be seen in farmhouses, churches and other places
These symbols were also reinterpreted on a case-by-case basis; the Jesuits sometimes interpret the three nails as symbols for the three basic religious vows poverty, celibacy and obedience.
Typical for the late Middle Ages is the attachment of the Jesus monogram in a halo, which symbolizes the shine emanating from the body of Christ. 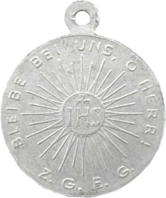 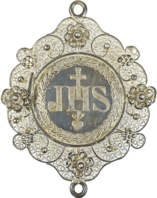