Transistor bc847 how to test it

You can also use a digital multimeter to test transistors when they are installed! See below.

After cannibalizing an old device, you often have tons of transistors in front of you, and the question arises:

Which transistor types are they, and are the transistors still usable? 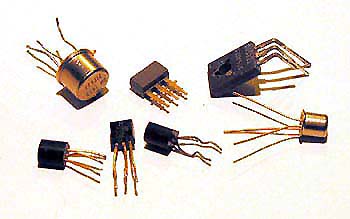 As a first approximation, let's assume that everything three Has legs and looks something like the parts in the adjacent photo, is a transistor. In order to test a transistor, however, we need to know two things:

To which one Type is it here: NPN or PNP?

What about the Leg occupancy from where are Emitter, Base, and collector (English: E.middle, B.ase, C.ollector)? Incidentally, the "legs" are called solder skewers in technical terms.

The first method can be to search data sheets on the Internet. But this can be quite time-consuming for old types, especially if you don't know the manufacturer.

The next method and the faster one to the first test are: A multiple measuring instrument and our fingers!.

Most often we will come across npn types!

So it is important to find 2 diodes. This works well with a very simple pointer instrument:

And now we start with the type determination:.

There are now three options:

If we find case 2 or 3, we now swap the (+) - and (-) - connections on the transistor, and the behavior must be exactly the opposite: If we previously had continuity on both legs, there must now be no continuity ; was previously blocked on both legs, then there must now be passage on both legs. In case 1 (passage on only one pair of legs) we restore the passage situation, only then we change the (-) connection from leg 1 to leg 2 or leg 3, depending on which one remained free, and we should pass again to have.

Checking the continuity with the "x10k" resistance measuring range between the base (red, plus) and collector (black, minus) of an npn transistor:


If we cannot achieve a deflection in the instrument, either the transistor is defective (unlikely if the above-described test for diode direction was successful), or the transistor has a very small current gain. Then you would have to work with a resistor instead of the finger, between 1k and 10k in size. So much for the test with a very cheap and simple one Pointer instrument.


And what does it all tell us?

Well, although the instructions were a little longer than expected, we can judge a removed transistor very quickly. If we rate it as OK, then it should be good for collector-emitter voltages of up to 20V and a collector current of 20mA.

If you want more, then you have to study data sheets. For most handicrafts, 20V / 20mA is always sufficient.

Tip for searching for datasheets on the net: For European BC types is sometimes only printed with the number, e.g. B. 337-10. American Transistors are often called 2Nxxxx (with xxxx a four-digit number); Only the four-digit number is then printed on the transistor. And japanese Transistors are called Syxxxx, where y stands for a letter, e.g. A. Only A1234, or whatever number is printed on the transistor.

We note: Name: e.g. BC108, npn, and paint the first assignment for it (such a nose on the transistor with metal housing always marks the emitter). For a transistor with a plastic housing the picture on the right will apply in most cases, sometimes the base and emitter are reversed

If you then want to search for data sheets, it is usually only possible in English. And then experience is also required; so this is more for old hands.

Transistors that fail our test are not necessarily defective. They can be unknown types (FETs, HF transistors), but also A-types with a low current gain. It is advisable to pack these in their own small box or sachet first. If you have a better idea of ​​the whole thing later, you might be able to do something with it.

What can you do with the transistors? One idea: build an accurate electronic thermometer!