How to interpret a scatter plot

Scatter plots are useful for developing statistical data to be interpreted. Each observation (or point) on a scatter plot has two coordinates - the first corresponds to the first part of the data in the pair (that is, the X Coordinates- the amount you move left or right). The second corresponds to the second part of the data in the coordinate pair (that's the Y-Coordinates- the amount you go up or down). The point that represents the observation is placed at the intersection of the two coordinates. 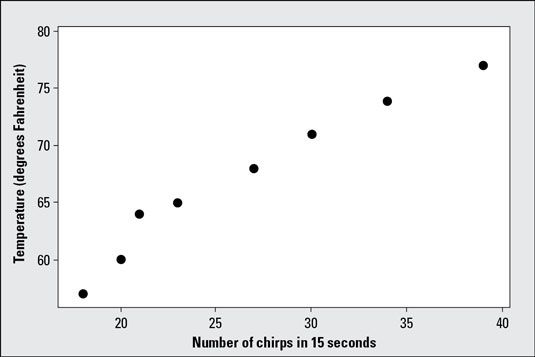 Scatter plot of outside temperature in relation to cricket chirps.

The above illustration shows a scatter plot for the temperature and cricket chirps data listed in the table below.

As the data ordered according to their XValues ​​correspond to the points on the scatter plot from left to right to the observations given in the table in the order listed.

You interpret a scatter plot to look for trends in the data as you go from left to right:

A linear relationship between X and Y is when the pattern of the X- and Y-Values ​​is like a line, either uphill (with a positive slope) or down (with a negative slope).

Scatter plots show possible associations or relationships between two variables. However, just because your diagram or graph is showing something does not mean that there is a cause and effect relationship.

For example, a doctor observes that people who take vitamin C every day seem to have fewer colds. Does this mean vitamin C prevents colds? Not necessarily. It could be that people who take more health every day are aware of vitamin C, but they also eat healthier, are not overweight, exercise every day, and wash their hands, often more. If this doctor really wants to know if it is the vitamin C that it does, she needs a well-designed experiment that rules out these factors.