Starbucks CEO Howard Schultz: We ve Built An Institution That Brings People Together

Three years after returning to Starbucks as CEO, Howard Schultz has turned the ailing chain around. He s now embarked on a tough journey to internationalize the chain and position it for growth in the developing world 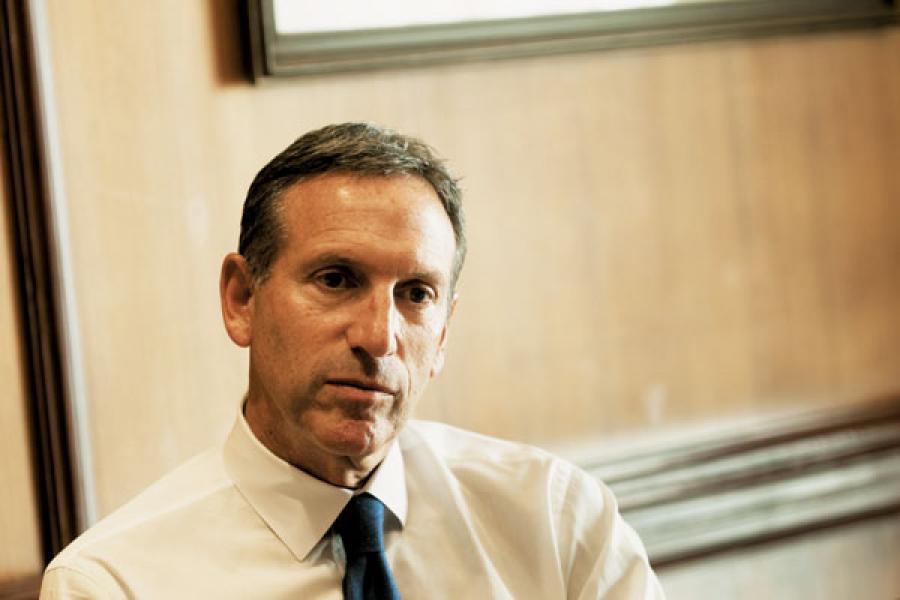 Name: Howard Schultz
Age: 57 years
Profiles: Chairman and CEO of Starbucks
Early Years: Born in a poor Jewish family in 1953, in Brooklyn, New York. One of the jobs he did when he was young was stretching fox skins. "It just teaches you at a young age what it takes to make money."
The Big Break: Joined Starbucks in 1982 as director, marketing. Bought the company in 1987.
Aim: To establish and grow the Starbucks brand in developing markets without sacrificing quality.


This is your first visit to India. Have you got a sense of the café culture here?
We’ve had many people visit India for the last two years on and off to assess the opportunity in the market. We’ve collectively concluded that we have to be here and that there is a large opportunity. It won't be easy. This is a difficult challenge and no one should underestimate the degree of difficulty. But having said that, we've had difficult challenges before in other markets, not least of which has been China, where we've been very successful.

We are excited and at the same time humbled by the challenges to navigate some of the systemic situations that exist here. In terms of the café culture, without saying anything disparaging, we think there is a fair gap between quality, execution and between what is in the market and what Starbucks does every day. But no one should assume that our success elsewhere in the world will give us success here. We have to earn it.

The Indian market presents serious challenges because affordability is a big virtue. How critical is it for Starbucks to hit the right price points?
I can't speak for what other people have done. If you look at our history in international markets since 1996, our pursuit of quality and excellence and the experience we have created around the world ... there is a common thread of people realizing that this is a company pursuing quality at every level and not lowering its standards for any market around the world. I think what we've learned is whether it is an emerging market or not, the consumer aspirationally wants quality and they want the true experience. I think it would be very disappointing for us to come all the way from Seattle to India and water down the experience because we don’t have the courage to create something that is consistent with our heritage. It is encouraging to see that the Indian consumer is frequenting many coffee stores but I don’t think their brands have been developed. It is almost as if people are just intercepting traffic. Just like we have done in China, we will create local relevancy, especially on the food side.

What’s the gap between coffee chains in India and what Starbucks offers?
I don’t want to sound disparaging but I have been in this business for the last 30 years and I don’t see anything in the marketplace that rivals anything we do. Also, a lot of these stores are franchised and so they're independent operators. I question the way these stores are
run operationally.

Why did you come back in January 2008 as CEO?
There were two things going on. One, the financial crisis was very tough in the US. Two, when I returned, we had our own internal challenges. Those challenges in many ways were self induced. The company had made a series of decisions that in many ways were not the right ones. And even though I was not the CEO - I was the chairman of the company - I was busy doing other things and not paying enough attention. I was still culpable. I did come back to transform the company. In the last quarter we had record revenues, record profits. It was our best quarter and best year in the history of Starbucks. The momentum and foundation has been rebuilt in terms of innovation and store design. In addition to that we've had innovations that have hit the bullseye. One was the reinvention of the instant coffee category with Via. It did $ 181 million in its first 12 months and we're just getting started. We’ve aggressively grown our international business and have record profits internationally, led by China.

We spent so much time rebuilding the domestic business and then John Cluver [president, Starbucks Coffee International] and his team were able to leverage lots of the progress we made in the US on to the international business, which began to give us great traction. There were four things we focused on - building capability in the market, investments in people, engaging our customers around locally relevant products and operation and execution. We're one year into the transformation of the international business.

How has the organization dealt with the fact that the center of gravity has begun to shift to the developing world?
I think the company is going through a significant amount of change and transformation. I think we've succeeded. For one, the international retail growth of stores will dwarf the level of growth in North America. It is the first time in history that this will happen.

In March 2008, Starbucks shut down every store in America to teach baristas how to brew the perfect coffee. What was the thinking behind that?
The media and Wall Street thought I was crazy because it was very costly. But when I came back, I realized you can't transform a company unless you are honest with the situation. When I returned I thought we had, at a minimum, lost the commitment to the execution of the perfect beverage. I thought we had to retrain 100,000 people. The truth of the matter is that it would be much for efficient and effective if we did it all at once. We decided within a few minutes of having that conversation that we were going to close every store. People said “What are you talking about? You can't close every store. " And that is what we did. What happened was that it turned into a major publicity thing for us. It created so much free publicity for us that it was beyond comprehension.

Staying grounded is hard when someone is as successful as you are. How does that tie into the whole focus on customer centricity that you've spoken about?
Success and growth can be an opportunity to cover a lot of mistakes. When you're growing a company at such a high level you're mostly focused on things in front of you. You never look back. Success and human behavior is more often than not linked to hubris. I want to make sure that as we have transformed the business, we don’t allow arrogance or hubris to in any way affect our behavior. Human nature means you start thinking you're better than yourself and you become lazy and sloppy. That did happen to Starbucks in years past. My role in the company is to continue to remind people how hard we have worked to transform the company and that success is not an entitlement.

Our average ticket size is $ 5. We have 200,000 employees and we're serving around 60 million customers a week. It has been said many times that we're not in the coffee business serving people but in the people business serving coffee. So that means that we've got to over-communicate to our people who we call partners and engage them in a way that they really understand what our intent is. We also have to recognize and reward great behavior. I think we are incredibly transparent with our people.

What has been the impact that Starbucks has had on popular culture?
It continues to surprise me. Things happen every day that are shocking. The people who come to our stores, the celebrities, the way Starbucks has changed behavior around the world. In 1996, when we opened in Japan, we were told that no Japanese consumer would ever eat food or beverage in the street, as he would lose face. Today you can walk in any city in Japan - small or large - and see thousands of people holding our cups. I think there is a bigger piece to the culture though. We're living in a world today that is lacking physical communities. There is no place for people to go for a whole host of reasons. With the evolution of technology, there is less and less human interaction. Culturally, Starbucks has been able to create an institution that brings people together.

An organization’s culture is often developed in its formative years. How did that journey happen at Starbucks?
The analogy for developing a corporate culture is like raising a child. The imprinting of a culture is like the early years of a young child. People can sense what the culture is. The fabric of the culture of our company has been built on trying to exceed the expectations of our people. If we don’t do that, we can’t exceed the expectations of our customers. Two examples of that are: Starbucks was the first company in America to give comprehensive health coverage to every employee and give stock options to every single employee.

(This story appears in the February 11, 2011 issue of Forbes India. You can buy our tablet version from Magzter.com. To visit our Archives, click here.)

Show more
Thank you for your comment, we value your opinion and the time you took to write to us!
<?