In a nutshell: what is Parkinson's?

Parkinson's disease is a disease of the central nervous system. Typical symptoms are movement disorders such as slow movement, stiff muscles, tremors and unstable posture.

The disease usually begins after the age of 50. It usually progresses slowly. It is estimated that one to two in 1000 people in Germany suffer from it.

Parkinson's disease is so far not curable, but there are therapeutic options. Medicines are usually used.

What are the symptoms of Parkinson's disease?

The classic four main symptoms of Parkinson's disease are: bradykinesia, rigidity, tremor, and postural instability. These terms describe the following:

Bradykinesia means that those affected move more slowly and less. Getting up, walking and turning cause difficulties. It is sometimes hardly possible to start movements, a movement blockage (akinesia) arises.

The first sign of the disease may be that one arm swings less when you walk. The posture is often bent, the gait becomes small steps. A rotation requires many intermediate steps. Gestures and facial expressions decrease, the face acts like a mask. The voice becomes quieter and more monotonous, the language more indistinct. The affected person has difficulty eating and often chokes. The handwriting becomes small and illegible.

Rigor describes a stiffness of the muscles. Every movement seems to be made against tenacious resistance. The neck and shoulder muscles are often affected first, often on one side.

The doctor may be able to detect the cogwheel phenomenon: for example, if he tries to straighten the bent arm of a Parkinson's patient, the extremity follows with jerky movements, as if a cogwheel were moving.

3) What is resting tremor?

Tremor is the name given to trembling. Parkinson's disease often involves a one-sided, slow tremor of the hands, and later also of the feet, mostly at rest.

It often disappears during sleep or during movement. When the hands are empty, the fingers sometimes rub against each other in a movement that is reminiscent of "counting coins". The tremor can also be absent in Parkinson's disease.

4) What is postural instability?

Postural instability describes a disruption of the holding and adjusting reflexes. Usually they allow the body to maintain balance.

If these reflexes are disturbed, sudden movements - for example due to an unexpected shock - can no longer be absorbed. The walk becomes unsafe overall, and those affected tend to fall. 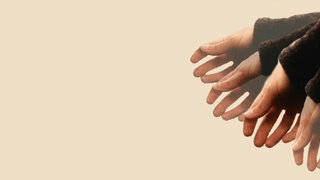 Tremors can have many causes: Parkinson's disease, drug side effects, and ...

Possible first signs of illness and accompanying symptoms in Parkinson's:

However, all of the symptoms mentioned can also have other causes. In addition, they do not have to be all present in Parkinson's disease.

Complication: what is an akinetic crisis?

An akinetic crisis can arise, for example, from infections, medication errors or operations. The patient becomes completely immobile, can no longer speak and can no longer swallow. Concomitant symptoms are sweating and a fast pulse. Such a crisis is dangerous and must be treated in the clinic. Failure to swallow saliva can get into the lungs and cause pneumonia.

Causes: How does Parkinson's disease develop?

In Parkinson's disease, primarily special nerve cells in the so-called black matter (substantia nigra) in the brain die. This leads to a lack of dopamine. This neurotransmitter, together with other messenger substances, is involved in controlling movement. The dopamine deficiency upsets the delicate balance of messenger substances.

Doctors differentiate between four forms of the disease when symptoms of Parkinson's are present:

2. Genetic forms of Parkinson's Syndrome: In very rare cases, Parkinson's is partially inherited and can then appear early in life. There are changes in the genes that lead to a familial form of Parkinson's disease.

4. Symptomatic (secondary) Parkinson's syndromes: The symptoms arise here from other causes, for example from drugs such as neuroleptics or calcium antagonists, a traumatic brain injury or poisoning.

Diagnosis: how is Parkinson's disease diagnosed?

Diagnosis is often difficult in the early stages of Parkinson's disease. The first clues can be a reduction in handwriting, impaired smell, strong muscle tension, difficulties in everyday activities such as brushing your teeth, buttoning the buttons or working on the computer.

Some patients notice problems walking early and fall more easily. Others injure themselves or their bed partner by violent movements during dream sleep.

The doctor makes the diagnosis on the basis of the symptoms: Parkinson's disease speaks if there is a sedentary lifestyle and another typical symptom - such as muscle stiffness, tremors or a disturbance of the holding and righting reflexes. The symptoms are often one-sided at first.

Imaging methods such as computed tomography (CT) and magnetic resonance tomography (MRT) are primarily used to rule out other causes. Positron emission tomography (PET) can indirectly make a reduction in the cells that release dopamine in the brain visible.

If the symptoms improve after attempting levodopa therapy, this is a strong indication of Parkinson's disease. Levodopa is a precursor to dopamine, which is converted to dopamine in the brain.

In unclear cases in particular, the diagnosis should be made by a specialist who has extensive experience with the disease.

Therapy: How is Parkinson's Disease Treated?

Parkinson's disease is treatable, but not curable. The therapy consists of several building blocks. The most important one is the use of medication. This means that the disease can often be controlled well for years.

However, over time, the effectiveness of certain anti-Parkinson drugs may decrease. Therefore, the medication needs to be adjusted at certain intervals.

The drug treatment aims to bring the messenger substances in the brain back into their equilibrium. Levodopa (L-Dopa) is a precursor of dopamine and has a particularly positive effect on mobility, against muscle stiffness, but also against tremors. However, after a long period of therapy, unpredictable and uncontrollable movements (hyperkinesia) and fluctuations in effect (on-off phenomena) can occur as side effects.

In order to counteract fluctuating active levels in advanced stages, there is also the option of a dopamine pump, which continuously delivers the dopamine messenger substance via a probe into the small intestine or under the skin.

A second group of drugs are the dopamine agonists. They increase the effect of the existing dopamine (for example pramipexole, lisuride, ropinirole). Newer dopamine agonists ensure uniform levels of the active substance and in some cases only have to be taken once a day (e.g. retarded ropinirole, retarded pramipexole). Or they release their active ingredient through a patch that has to be changed every day (for example rotigotine patch). Side effects of dopamine agonists can occur in the form of daytime sleepiness or sleepiness and in the form of compulsive behavior (for example, compulsion to buy, gambling addiction).

There are also other groups of drugs that reduce the fluctuations in the effects of dopamine (COMT inhibitors such as entacapone and tolcapone) or slow down its breakdown (MAO-B inhibitors such as selegiline and rasagiline). Anticholinergics (for example Biperiden, Bornaprine) can effectively reduce tremors. The NMDA inhibitor amantadine is said to increase the release of dopamine and improve mobility.

The different groups of active ingredients can also be combined with one another. The drug setting is challenging because the symptoms and drug side effects can vary greatly, as can the response to the drugs.

When it comes to surgical therapy, the doctor and patient must weigh the risks and benefits. The procedure should only be used if the drug therapy is no longer sufficient and the Parkinson's patient therefore loses quality of life.

Under general anesthesia, small electrodes are permanently inserted at precisely calculated points in the brain. Certain areas of the brain can now be electrically stimulated and thus inhibited. In this way, symptoms can be alleviated in a targeted manner. This stimulation can be provided by a programmed pacemaker or, if necessary, by the patient himself.

Parkinson's Disease Diet: There is no special diet that could influence the course of the disease. It is important that patients consume enough calories and eat a balanced diet.

As the disease progresses, patients and relatives are faced with the question of home care or home care. If you decide to take care of your home, you can take advantage of the financial benefits of long-term care insurance and call in a nursing service. You can find support with planning from the attending physician, but also from the self-help groups.

There are self-help groups for people with Parkinson's disease, but also for relatives of those affected, where you can exchange experiences with the disease, the therapy and the doctors. Self-help groups also inform the public about the disease and thus promote education. They also stand up for the special needs of patients.

In Parkinson's disease, certain nerve cells in the brain die. Researchers around the world are therefore looking for a way to replace these dead brain cells with new, functional cells. One idea is to take stem cells from the patient's bone marrow and implant them in the patient's brain (stem cell injection, stem cell transplant). According to the theory, the stem cells should transform themselves into new, functional nerve cells in the sick person's brain, or at least compensate for deficits.

This approach sounds promising, but it is still unclear whether it will work. According to experts, there has not yet been sufficient research into what the stem cells actually do in the brain. The stem cells could benefit the patient, they could remain ineffective - or they could possibly even harm the patient. What many experts see with concern: Corresponding stem cell injections are already being offered - by private companies or clinics, usually for a considerable sum of money. Statutory health insurance does not pay for Parkinson's treatment with adult stem cells. The German Society for Neurology warns Parkinson's patients about the procedure. She doubts that efficacy and safety have been scientifically proven and would not recommend the method to an affected person at this point in time.

Where does the name Parkinson's come from?